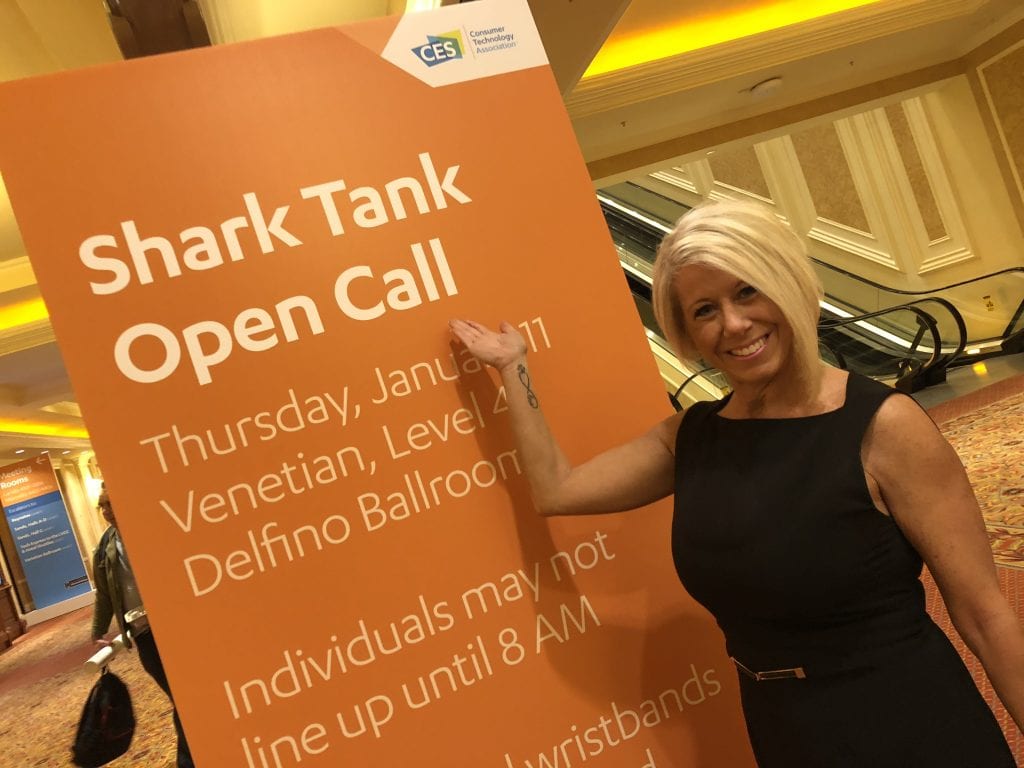 I had the excitement of attending the first open casting call for Shark tank season 10 in Las Vegas! As like many other entrepreneurs, I am obsessed with this show and have always loved watching Shark Tank. I sit and envision myself on stage pitching the sharks. (And of course getting a deal! lol)

One of my business dreams is to have my products in Sephora and on QVC (Lori..are you reading this? I’m ready! )

So it all happened pretty quickly. On Jan 5th I got a text message from a friend. She wanted me to know that they were holding the first open casting call at the annual CES convention in Las Vegas at the Venetian hotel in 6 days on Jan 11th!

Once I heard that my head was spinning! I live in Florida but ironically I was actually scheduled go to Las Vegas as a sponsor for a spray tan convention that same weekend! I was thinking to myself OMG what are the chances? I already had a flight and hotel room already booked at the Venetian for Jan 13th.

I have lived my life with the belief that things happen for a reason and I started thinking…what are the chances that they were going to be holding an open casting call at the SAME hotel I was already booked at! But I had a lot to think about logistically. Being a business owner it is hard for me to get away from the office during the week due to the large amount of daily shipping and day to day operations. I started thinking.. do I take a chance & go to Vegas early or do I wait for another location to come closer.  Am I going to have enough time to prepare the application and pitch?

Needless to say the next few days were crazy, I was in full over analyzing mode and my boyfriend was a huge & amazing help. He has been my biggest supporter since day 1 so he was all for it. You have to take opportunities when they are presented as you never know if and when you will get another shot. (Plus waiting for another location might not have worked out.)

I called the Venetian to change my reservation to arrive a few days early. I was told that the hotel rate just for that Wednesday alone was over $700 for the night!! (Gulp) Being that the CES convention is the largest, all hotels were crazy expensive. Heck the motel 6 was close to $300 a night! So after a bunch of debating I sucked it up and just figured that this would be my vacation. I had to go alone so I was actually on my own for 4 days until other people arrived for the Spray tanning convention.

So now the fun part! I had to complete a 18 page application. I had to provide info on there such as my financials, why I wanted an investment and what I would do with that money etc. Being detail oriented I even put together a binder (Pink of course!)

This process was actually very important for me as an entrepreneur. Perfect Glow has been very successful but when gathering all of this information it really hit home & put into perspective the success I have achieved. Seeing on paper how much I have grown this business and have accomplished over the past few years was quite an emotional process. I thought to myself that regardless of the outcome I was really proud of what I have built and blessed that I actually was able to even have an opportunity to have a shot at this!

The night before I was scheduled to fly out I got this fortune cookie at dinner (Ahhhh) Was it another sign? 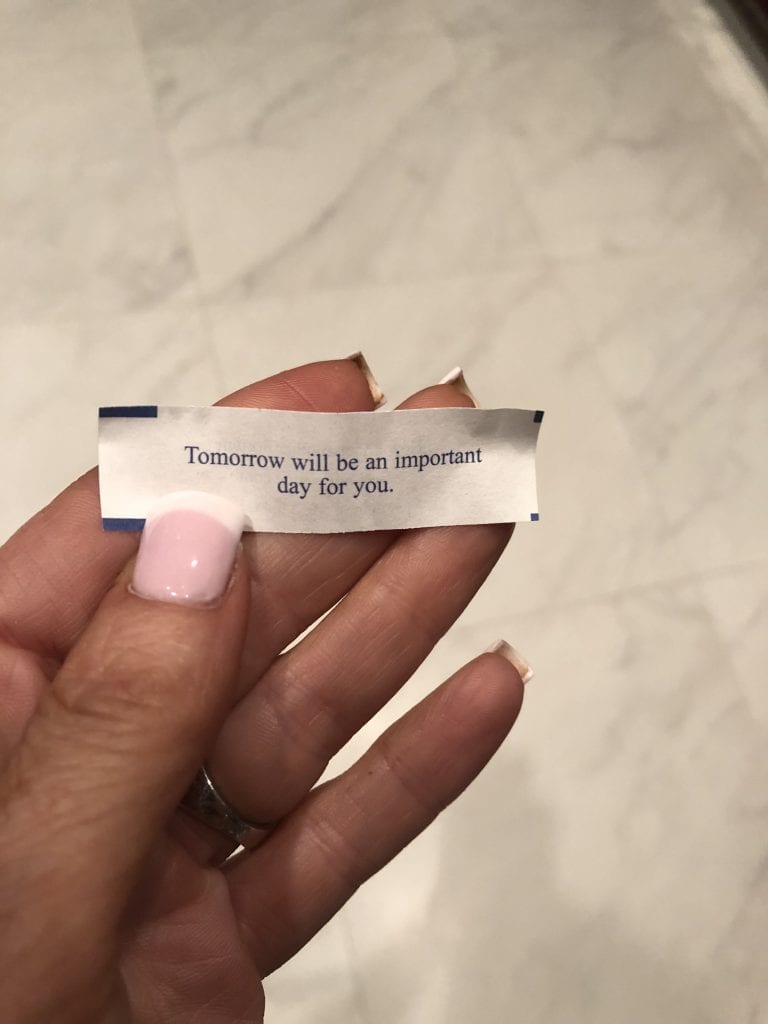 The first day I got there the hotel was a madhouse. I had stayed at the Venetian before and have never seen it so packed but they were hosting the convention.  The first night I decided to turn in early due to jet lag and having to wake up early the next day I wanted to get my rest.   I went to the small gift shop to get some necessities for the room (water and wine lol) and when I was paying for my items I saw Mark Cuban leaving with (I think) his Vitamin water ! There were thousands of people in this hotel and I am in the gift shop the same time as with Cuban!

Was this another sign? I tried to find him in the sea of madness in the hotel but didn’t  (What was I going to do if I did? I don’t know, maybe give an elevator pitch or mention I had a cool Pink binder? I can’t quite tell ya but knowing my personality I am sure I would have come up with something.)

That night in my room was the first time that my nerves really started to settle in.  You get a 1 minute pitch at the casting call to present and sell yourself. I  just kept rehearsing my pitch over and over. (Being that I am a native New Yorker talking is NOT a problem for me) BUT I just couldn’t cut my pitch down to under that minute.  I kept writing down different versions and of course overthinking it! Eventually I decided to just do a pitch that came from my gut.

I will say that doing months of Facebook live broadcasts on my business page was a huge help to me. Most of the time when I do them I do not go off a script and just speak off the cuff. So that was something that was very helpful to prepare for the open casting call as well as giving me confidence to speak in front of others.

The next morning I arrived at the open call casting area 2 hours early around 7am. They say that is not necessary to show up early because anyone that got there by a certain time was guaranteed a wristband. But I just figured that the earlier I got there maybe I could be selected to do my pitch earlier. I was afraid of a very long day and being told to come back at like 5 pm. The line was already very long but not a madhouse like I was expecting. They said that you could bring props if you needed to and I had brought bottles of my self tanning products to show my pretty branding and product line. But I forgot them in my hotel room! (Melissa…are you kidding me? ) A nice woman said she would save my spot in line. Heels off, I rushed back to my room to get them  (A cardio workout if you know how big the Venetian hotel is) When I came back, the line had moved into the main ballroom so I had to go further back on the line.

The CES convention was going on simultaneously so there was a lot of law enforcement and even bomb sniffing dogs. (I was happy to see all that security actually) When  it was time for me to make my pitch there were even 2 uniformed police officers standing behind the casting director.

I do have to say that for such a huge opportunity I was actually surprised at how many people showed up without even completing the application. But on the flip side it was pretty cool to see all these people trying (like me) to get the shot to make their dreams happen.

The casting crew was very nice and eventually they started handing out wristbands. I was put into the second group that had to come back 2 hours later ( Not too bad) This clip is from when I got my wristband. (Number 110)

So I enjoyed a cocktail to calm the nerves,  played some slots (Didn’t leave rich) and did some live videos on social media to pass the time.

When it was time to go back it was a little bit of a wait but again not too bad. They call your number and you go up to do your pitch. I thought it was going to be in a separate room but I did my pitch in the main ballroom (But it was not like you were on display as the rest of the crowd really cant hear you)

I didn’t pitch to any of the sharks as they were not in attendance ( just the casting company) They were all very nice and Mindy and the crew really did a great job making people feel comfortable and less stressed. At least at this location they didn’t hold you to the 60 second rule which was great as of course I exceeded that a little bit so that was a big relief.  I talked about my Perfect Glow self tanning products, pro spray tan solution and spray tan academy. It was probabally less than 10 minutes total and they were very nice. Then they just say to give it a few months to see if you get selected to move forward in the process. 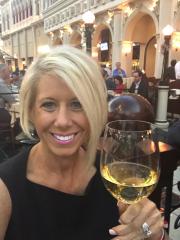 Afterwards I went to Italy (Aka the Venetian) got a glass of wine and felt relieved. Auditioning for Shark Tank season 10 was such an amazing experience. Every entrepreneur should do whatever it takes to follow their dream. Without any risk there is no reward. All I can say at this point is that I have to wait and see what happens.

Hopefully there will be a Blog part 2 🙂 Stay tuned!

"I have been using Perfect Glow Dark Rapid Tanning foam and products for over a year and I just simply love them! I get so dark and it fades so evenly! One of the best tanning products out there..."

"Melissa has created another great product! No smell, stickiness, streaks, or orange color. Easy to apply. Quick developing time. Its such a gorgeous brown. Lasts awhile! MUST HAVE!!!"

“I just sprayed 4 people with 12% Perfect Glow– LIQUID GOLD my friends!!!! Just placed an order today. LOVE THIS SOLUTION! Extremely natural too! Feedback from my clients has been AMAZING!”

“It is the very best product! Perfect Glow has taken my business to the next level. Thank you for an amazing product and for your amazing customer service!”

“I bought my first bottle of the Rapid Cocktail and my clientele has really increased! Everyone loves it. Y’all shipped my last order to me right away and thank you for that!
MORE REVIEWS